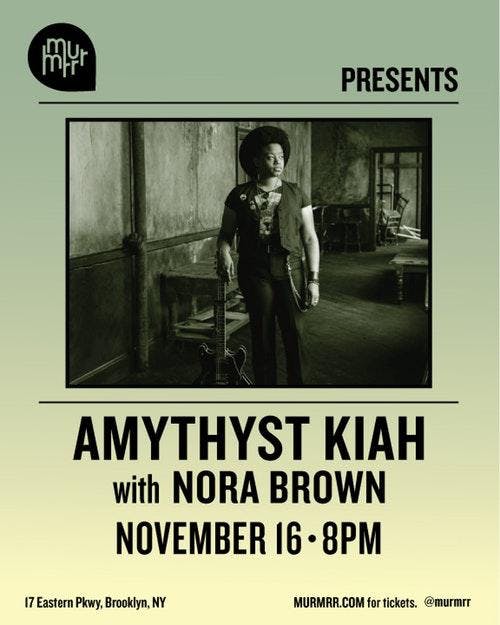 “Her razor-sharp guitar picking alone guarantees her a place among blues masters, but it’s her deep-hued voice that can change on a dime from brushed steel to melted toffee that commands attention.” —The New York Times

Born in Chattanooga and now based in Johnson City, Amythyst Kiah’s commanding stage presence is matched by her raw and powerful vocals—a deeply moving, hypnotic sound that stirs echoes of a distant and restless past.

Our Native Daughters, her recent collaboration with Rhiannon Giddens, Leyla McCalla, and Allison Russell (Birds of Chicago), has delivered a full-length album produced by Rhiannon Giddens and Dirk Powell, Songs of Our Native Daughters (out now on Smithsonian Folkways). NPR described the opening track, Black Myself, written by Amythyst, as “the simmering defiance of self-respect in the face of racism.” The supergroup will hit the road in July with a series of special dates that include performances at Washington D.C.’s Smithsonian Museum of African American History & Culture as well as Newport Folk Festival. Most recently, the group has been nominated for Duo/Group of the Year at the 2019 Americana Honors & Awards.

Provocative and fierce, Amythyst’s ability to cross boundaries is groundbreaking and simply unforgettable.

Little Nora Brown plays banjo, ukulele, and accordion - She started learning ukulele at age 6 from the late Shlomo Pestcoe. With a focus on old-time music, he laid a foundation of love of music and the community it creates. He instilled in her the lesson that music is meant to be shared. Now 13 years old, Nora plays and sings solo shows and plays with many of her old time mentors including fiddler Stephanie Coleman, under the band name Little Leatherwood and harmonica master Trip Henderson under the band name Tin + Bone.

Today Nora is being mentored by many of her favorite old time musicians including Alice Gerrard, John Cohen, Clifton Hicks, KC Groves, Courtney Hartman, Anna Roberts-Gevalt, Mac Traynham, John Haywood, Ali Dineen, and Brett Ratliff. She won 1st place in youth banjo in 2017 and 2018 at the Clifftop Appalachian String Band Music Festival in West Virginia and 3rd place in 2018 in the overall banjo competition. She also took first place in the 2018 flatfoot contest at Elk Creek. In 2018 she won a scholarship to attend Cowan Creek Appalachian Music School in Whitewburg, KY. In both 2017 and 2018 she’s performed in many old time music festivals including: Oldtone Roots Music Festival in Hillsdale, NY, Winter and Summer Hoots in Ashokan, NY, Washington Square Park Folk Festival NYC, Brooklyn Americana Roots Music Festival and the Brooklyn Folk Festival. She has also been a guest on the Floyd Radio Show in Floyd VA.

She has been published in Sing Out! “Murder Ballad Monday” and most recently The Bluegrass Situation: Roots Culture Redifined “10 Young Banjo Players You Aren’t Paying Enough Attention To”.