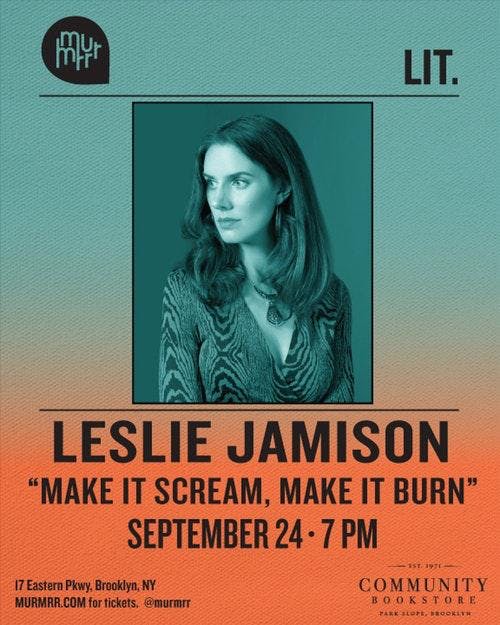 iCal
Google
Murmrr Lit is proud to welcome Leslie Jamison for a reading and discussion of her new essay collection, Make It Scream, Make It Burn.

With the virtuosic synthesis of memoir, criticism, and journalism for which she has become known, Leslie Jamison offers us fourteen new essays that are by turns ecstatic, searching, staggering, and wise. In its kaleidoscopic sweep, Make It Scream, Make It Burn creates a profound exploration of the oceanic depths of longing and the reverberations of obsession.

Among Jamison's subjects are 52 Blue, deemed "the loneliest whale in the world"; the eerie past-life memories of children; the devoted citizens of an online world called Second Life; the haunted landscape of the Sri Lankan Civil War; and an entire museum dedicated to the relics of broken relationships.

Leslie Jamison is the author of the New York Times bestsellers The Recovering and The Empathy Exams, and the novel The Gin Closet. She is a contributing writer for the New York Times Magazine, and her work has appeared in publications including The Atlantic, Harper's, the New York Times Book Review, the Oxford American, and the Virginia Quarterly Review. She directs the graduate nonfiction program at Columbia University and lives in Brooklyn with her family.

Meghan O’Rourke began her career as one of the youngest editors in the history of The New Yorker. Since then, she has served as Culture Editor and Literary Critic for Slate as well as Poetry Editor and Advisory Editor for The Paris Review. Her essays, criticism, and poems have appeared in Slate, The New Yorker, The New York Times Magazine, The New York Times Book Review,The Nation, Redbook, Vogue, Poetry, The Kenyon Review, and Best American Poetry. O’Rourke is also the author of the acclaimed book of poems Halflife, which was a finalist for both the Patterson Poetry Prize and Britain’s Forward First Book Prize. She was awarded the inaugural May Sarton Poetry Prize, the Union League Prize for Poetry from the Poetry Foundation, a Lannan Literary Fellowship, two Pushcart Prizes, and a Front Page Award for her cultural criticism. One of three judges chosen to select Granta’s Best Young American Novelists in 2007, she has been a fellow at the MacDowell Colony and a finalist for the Rome Prize of the Academy of Arts and Letters. She has appeared on PBS’s “Charlie Rose” and on NPR. A graduate of Yale University, she teaches at Princeton and New York University and lives in Brooklyn, where she grew up.