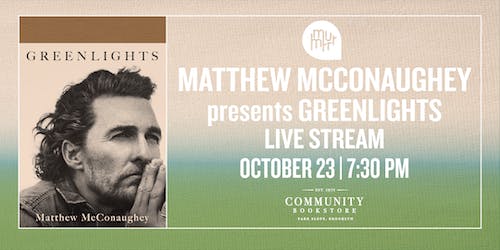 iCal
Google
Murmrr Lit is proud to present Matthew McConaughey for the release of his new memoir, Greenlights. 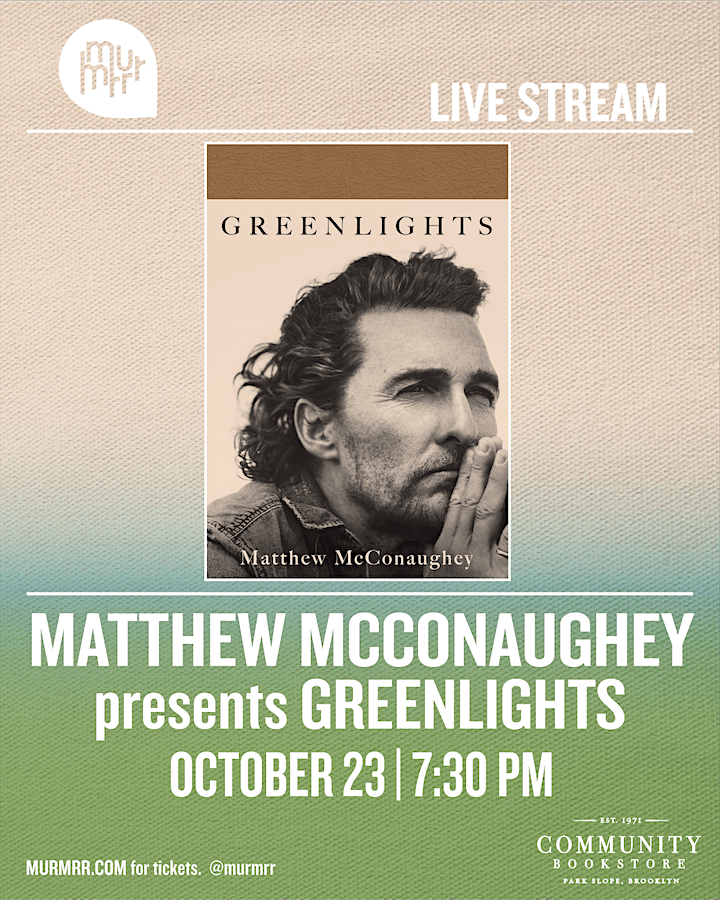 Murmrr Lit is proud to present Matthew McConaughey for the release of his new memoir, Greenlights. The first 300 ticket holders will receive a signed bookplate shipped separately.

From the Academy Award-winning actor, an unconventional memoir filled with raucous stories, outlaw wisdom, and lessons learned the hard way about living with greater satisfaction.

Recently, I worked up the courage to sit down with those diaries. I found stories I experienced, lessons I learned and forgot, poems, prayers, prescriptions, beliefs about what matters, some great photographs, and a whole bunch of bumper stickers. I found a reliable theme, an approach to living that gave me more satisfaction, at the time, and still: If you know how, and when, to deal with life’s challenges—how to get relative with the inevitable—you can enjoy a state of success I call “catching greenlights.”

So I took a one-way ticket to the desert and wrote this book: an album, a record, a story of my life so far. This is fifty years of my sights and seens, felts and figured-outs, cools and shamefuls. Graces, truths, and beauties of brutality. Getting away withs, getting caughts, and getting wets while trying to dance between the raindrops.

Hopefully, it’s medicine that tastes good, a couple of aspirin instead of the infirmary, a spaceship to Mars without needing your pilot’s license, going to church without having to be born again, and laughing through the tears.

It’s a love letter. To life. It’s also a guide to catching more greenlights—and to realizing that the yellows and reds eventually turn green too.

Texas native MATTHEW McCONAUGHEY is one of Hollywood’s most sought-after leading men. A chance meeting in Austin with casting director and producer Don Phillips led him to director Richard Linklater, who launched the actor’s career in the cult classic “Dazed and Confused.” Since then, he has won an Academy Award for his portrayal of Ron Woodruff in "Dallas Buyers Club", appeared in over 40 feature films that have grossed over $1 billion; and has become a producer, director, and philanthropist with his just keep livin Foundation – all the while sticking to his Texas roots and “jk livin” philosophy. McConaughey also serves as creative director for Wild Turkey and has co-created his own bourbon, Longbranch. He serves as Minister of Culture/M.O.C. for the University of Texas Athletic Department and The Austin FC Soccer Club, where he is part owner. McConaughey will launch his first book, Greenlights on October 20, 2020. He currently resides in Austin, Texas with his wife Camilla and their three kids, while he is a professor at the University of Texas in Austin.

Greenlights will be published on October 20th, and books will begin shipping on that date. This is a US-based event ONLY, and please allow up to 3-4 weeks for delivery. Due to complications around shipping during the pandemic, delays can be common. We cannot guarantee a replay of the program. Please keep this in mind before purchasing a ticket. There will be no refunds for missing the live event. All tickets include the cost of shipping to domestic addresses only.